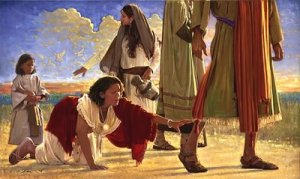 Does God still heal? Or did healing pass with the early church and the time of the Apostles? Is modern medicine and technology God’s gift to mankind, to heal the sick and afflicted?  The prophet Isaiah, looking centuries into the future wrote this of Jesus.

“As many were astonied at thee; his visage was so marred more than any man,and his form more than the sons of men.”Isa.52.14 “But he was wounded for our transgressions, he was bruised for our iniquities, the chastisement of our peace was upon him; and with his stripes we are healed.” Isa. 53.5

The Roman soldiers beat and abused Jesus before his crucifixion. Normally, it was Roman policy to whip a criminal with a cat of nine tails. This was a whip with shards of metal and glass embedded into it, that tore open the flesh of the person being whipped. After this, the person was released, and this was the punishment for their crime. But when this was done to Jesus,  and Pilate urged the crowd to have him released, they demanded that Pilate have him crucified. Jesus went through the terrible beating before his crucifixion, in part, that we would be healed.

Why did Jesus travel throughout the land healing the sick? It’s recorded time and again in the four gospels, how Jesus healed the sick that came to him. Did Jesus heal the sick, to prove as a sign to people that he was the Messiah?

“And Jesus went forth, and saw a great multitude, and was moved with compassion toward them, and he healed their sick.” Math.14.14

Jesus healed the sick, because he had compassion on them. Not as a sign to anyone.  The scribes and Pharisees asked Jesus for a sign that he was the Messiah, and he answered them,

Jesus did not heal people as a sign, he simply had compassion on them. Jesus has the same compassion on people today. It is God’s will for us to be forgiven of our sins and healed of our sicknesses. What must we do to be healed by God?  We simply have to believe. Anything more than that, would be taking away from the glory, and honor, that is due God the Father and the Lord Jesus, and his finished work on the cross. Paul wrote this, in his letter to the church in Corinth.

” But I fear, lest by any means, as the serpent beguiled Eve, through his subtilty , so your minds should be corrupted from the simplicity that is in Christ.” 2Corn.11.3

God does not heal us based on how good we are, or what we have done for him lately. If this were the case, then we could in part, take credit for our healing.  God heals us, because Jesus paid the price for our healing, by his beating and crucifixion.

There is therefore no boasting, when  it comes to any gift from God. And all good things come from our heavenly Father. We simply believe, and give thanks.